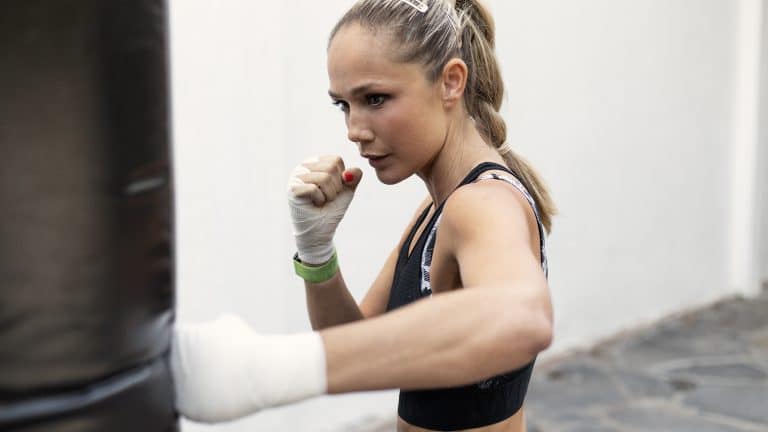 “Strength is the ruling virtue. Think how many beautiful things must have died for the lack of strength to protect themselves.” Enter The Dragon

Five mornings a week, I leave the house for boxing before the sun comes up. A few days ago, I started to notice that the only people I pass on the way to the gym are men. Now that could be because the ladies in the neighbourhood love a lie-in but it’s more likely that, as I live in an area with a lot of ongoing construction, these men are on their way to work.

As I jog past these small groups of guys in the half-light, I am under no illusion that any one of them could overpower me with little difficulty. And although it’s unlikely that any of them have malicious intent, I am aware of my vulnerability due to my size and relative lack of strength.

I don’t know whether I’d have been as conscious of this fact had I not heard evolutionary psychologist Geoffrey Miller, on the Mating Grounds podcast a few years ago, putting words to the female perspective. He said, when a woman walks into a bar, her experience is of entering an enclosed space populated by groups of men who are far bigger and stronger than her, possibly inebriated and in a predatory mood.

I don’t know why the physical strength differential between men and women and the effect that it has on our respective experiences of the world isn’t talked about more often. Women are approximately 50-60% as strong as men in the upper body and on average, men are about 15 cm (6 inches) taller. So guys, imagine how it would feel to live amongst creatures 6 inches taller than you and almost twice as strong, who were biologically programmed to pursue a sexual agenda, with you as its object.

THE HIDDEN COST OF ISOLATION

“There is more wisdom in your body than in your deepest philosophy.” Friedrich Nietzsche

I’ve often read that women are less good than men at managing stress and I imagine that this strength disparity is a factor. From 2009, I lived abroad for ten years, mostly on my own and it’s no coincidence that my physical and mental health was in free fall for much of that time. Looking back, I realise that my body was in flight-or-flight for about a decade because unconsciously, I knew that I couldn’t defend myself and felt constantly vulnerable to threat.

Now that I live with a friend, who has shown himself to be more than capable in potentially dangerous situations in which my tendency is to freeze, my health and happiness continue to improve. I imagine that this is in part because I am no longer set to hyper-vigilant mode with a constant stream of cortisol and adrenaline running through my veins.

“The purpose of life is to live it, to taste experience to the utmost, to reach out eagerly and without fear for newer and richer experience.” Eleanor Roosevelt

I’m still fiercely independent and my desire to travel and experience new things continues to grow but I don’t know how much more solo travel there is in my future. I’m just not sure it’s worth the risk. Not, at least, until I’ve spent a few more months working on my left hook.