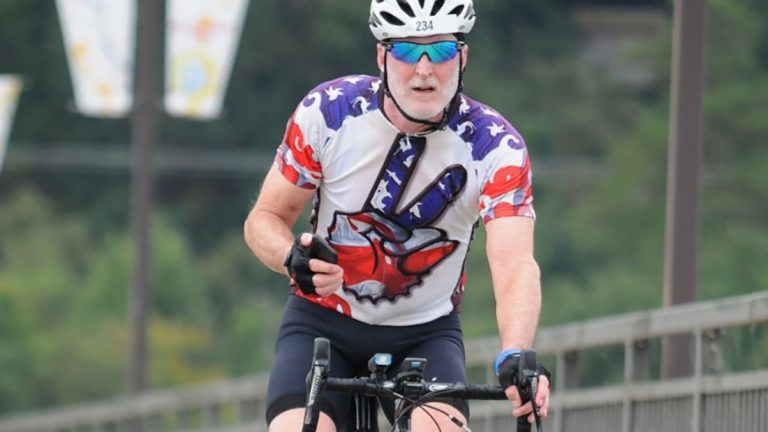 “I’m a software developer with a fast-paced, high-pressure job. There is a really good reason less than 1% of software developers are older than me: it’s hard and unless you take care of yourself mentally and physically, you just can’t continue.”

A year ago, I had never done any yoga. I’m not sure why, but it was just not my thing. I’ve enjoyed riding my bike since I was four years old and last winter I got into the Sufferfest because of both bad weather and a lack of time to ride outside. I did a few of Abi’s videos and then came the 30-day challenge. I like challenges! And, I found out that I like yoga as well. The first time I heard Abi say, “Swan dive down, keep your back straight and touch the mat,” I just laughed. Um, no can do. Today, I can do it easily. It’s nice to do something and see progress and growth. And it’s even better when that progress helps in the real world.

Unlike many who use this site, I’m not a competitive cyclist. I used to be a competitive athlete, but that was a long, long time ago. But that does not mean I’m not competitive or I don’t want to get better on my bike. When I’m out on a club ride, there are always those individuals I’d love to beat in the next “go zone.” One of the things that yoga has helped me with is my flexibility. It’s not easy getting more flexible when we get older, but doing yoga has certainly helped me. I thought about this when I was riding in significant wind today and I was able to maintain a better aero position for a longer period of time.

I’m a software developer with a fast-paced, high-pressure job. There is a really good reason less than 1% of software developers are older than me: it’s hard and unless you take care of yourself mentally and physically, you just can’t continue. There have been plenty of days where I would have liked to get off of this merry-go-round, but it’s just not going to happen any time soon, and this last year, doing yoga has helped to make the pressure easier. I’ve had a particularly difficult last month professionally and personally, and it was time for my yearly physical last week. I’ve had a systolic blood pressure somewhat over the new, more stringent guidelines for several years. Although I felt as wound up as a top when I was measured, my pressure dropped 8 points over a year ago and I’m now in the safe range. I’m convinced that yoga has played a part in that improvement.

THE STRESS OF BEING A DEDICATED CARE-GIVER

I’m a caregiver. In college, I chased a girl 3,000 miles. My parents thought I was crazy. I graduated from college one day and got married the next. My best friend, my wife of 40 years, has a rare, mitochondrial myopathy which is slowly destroying all of her cells—muscle, nerves, everything. We first discovered this in 2004 and she has been in a wheelchair full-time since 2012. Being a caregiver is like running an ultra-marathon. It’s not hours, days, weeks or months, it’s years. And for me, it’s also years of the stress of seeing my best friend and companion slowly fail. It’s hard.

I had previously tried some of the meditation apps, and they were somewhat helpful, but I find that doing something physical (yoga!) and concentrating on my breathing at the same time is much more helpful.

AN ANTIDOTE TO A HIGH-PRESSURE LIFESTYLE

Finally, some of the great things about Abi and her 15-minute videos: