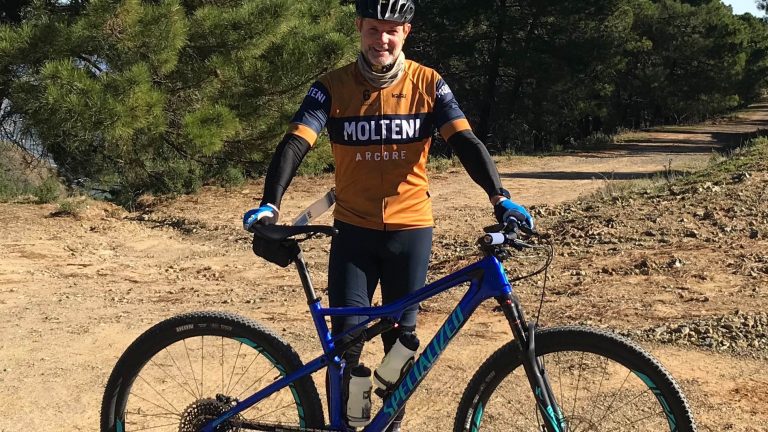 “I have a greater understanding of my body and can feel where pain or tightness is originating from and use yoga to alleviate or correct it.”

Having raced MTB quite successfully back in the 1990s, after a youth spent in motorcycle trials competition, I made the decision to have a go again in my latter years and reclaim my former glory. Cue the rude awakening! Now in my 50s, “surely all the guys in Masters 50 are old duffers out for a Sunday ride and a feed at the food stops”? Of course not, a mixture of ex-pros and hardened campaigners are what was delivered up racing XC Marathon and half Marathon here in Southern Spain.

TWISTED AND TANGLED LIKE THE INSIDE OF A GOLF BALL

After an initial 9km ride out and back from my house to prepare for my first race, and being resuscitated by my wife on my return, surely it was never this hard! I knew something had to be done. So research and training began. Steadily, over two years, I became stronger and results improved (like taking an hour off my time for one local race the following year). However, as results and strength improved my body just seemed to be becoming tighter. I liken it to the inside of a golf ball, all twisted, under tension and tangled inside. I was losing my range of motion and I knew this had to be affecting my performance as well as daily life. I was aware of yoga and a few friends were extolling its virtues, but I was worried about my lack of knowledge and “doing more harm than good”.

LOOKING FOR A RECOVERY PLAN

I bought a pilates DVD, but that wasn’t engaging and didn’t seem specific enough. I bought an indoor trainer and started using Zwift and a Zwift gravel training plan (No MTB), mostly because of the opposite reason most people buy an indoor trainer, the heat here. The summer months are well over 40ºC and it’s too hot to train outside.

Then, through GCN and “The Plan with Dan”, I discovered The Sufferfest. I looked into it, signed up and committed to a 12-week XC MTB training plan with yoga, strength and mental toughness incorporated, to start on the Monday after one of my major races for 2019, The Andalucia Bike Race. I must say that initially I became worse before I improved, the yoga and the strength training took my body out of it’s tight and limited range of movement and asked it to stretch out and expand, to begin with it resisted! I triggered imbalances, tight areas, had pain where I didn’t know you could have pain, but slowly my body began to accept this new range of movement and became more flexible, more stable and able to recover in a shorter period after hard efforts like races or training sessions. I was adapting!

Fast forward to today, six months in and still very much a yoga newbie, I am trying to incorporate yoga into daily life and have again incorporated it into my next 12-week plan with the Sufferfest, this time at intermediate level (I took the beginner option in the last plan). I have a greater understanding of my body and can feel where pain or tightness is originating from and use yoga to alleviate or correct it. The outcome is: I am more flexible, I am less prone to injury, I have more muscular stability on the bike, I recover faster and I have a set of “go to” sessions if I sense pain or tightness coming on which I know will alleviate the situation, giving me the confidence to go harder when training and racing.